Tito: "The result is not definitive"

The Azulgrana manager, who is pleased with tonight's result, believes that the 3-2 "is not definitive"  He defended Valdés' performance, despite the keeper's error that led to Madrid's second goal. "We ask him to play like this. If he boots the ball up the field we wouldn’t have any semblance of a passing style of play”

“I’m sticking with the good game we played,” said Tito Vilanova when asked to give his impressions on tonight’s match against Real Madrid. The manager added that “we dominated and we created chances to score. I think Madrid’s two goals were scored at the right time [for them].” The Catalan knows that his team could have won by a larger margin but he simply said “we have the tie in our favour and we’ll go to the Barnabéu to fight for the title.”

From the 4-1 to the 3-2  Vilanova played down the fact that his team very nearly went 4-1 up just before Madrid pulled one back to make it 3-2. “The result isn’t definitive for either side. It’s good that we won but we could have ended the match with a larger margin of victory yet, in the end, the result was pretty tight." The manager added that "the result is not definitive"

On the play that led to the 3-2, the manager defended Valdés and explained that Barça’s fundamental system of play revolves around the keeper being able to play the ball with his feet. “We asked him to do that. If he boots the ball down the field we wouldn’t have any semblance of a passing style of play,” said Vilanova. “During these years he’s given us a lot and he’s helped us build our play up from the back.” “Pedro is a dependable player” Vilanova praised the man that scored the equaliser moments after Cristiano Ronaldo’s opener, Perdo Rodíguez: “he’s doing well emotionally and physically. I hope he can have an injury-free year. He’s a very dependable player. He helps the team a lot on offense and when he plays, he usually scores.”

Andrés Iniesta feels that it was a great all-round performance for FC Barcelona against Madrid, and insists that his team will be looking to win the second leg

Iniesta played a key role in Barça’s win over Madrid (3-2). He forced a penalty to make it 2-1 and provided the assist for Xavi to score the third. “I am happy with my game” he said in an interview with ‘El Marcador’ on Barça TV. “But I hope there is much more to come.”

On course for first trophy

He was also more than happy with the way his team played. “We played 90 very complete minutes. It’s not easy so early on in the season, against such an opponent and in such heat.” But there were a lot of positives to be taken from the match. “We on good course to win the trophy and the sooner we hit our top form, the better”.

Asked about Jordi Alba and Alex Song, the two summer signings, Iniesta was full of praise for both of them. “Alba was here for years, he is a player like us, and I don’t think he’ll have any trouble adapting” he said on the former, and on Song he commented that “he is a great reinforcement for this season and those to come”. Piqué: "We're confident and ready for the return leg at the Bernabéu"

"We're proud of how we played the match. We're confident and ready for the match away to Osasuna and for the return leg at the Bernabéu," said the defender  Javier Mascherano praised Gerard Piqué and Carles Puyol, "it's very easy to play with Gerard and Carles, they are the best defenders in the world"

Gérard Piqué , who played all 90 minutes of the Clásico, sent a clear message after tonight’s match: “we are proud of the match me played.” Piqué noted that “sometimes you need a lot of chances to score, they took their two chances and they converted on both of them, but I believe we deserved better.” Finally, the Azulgrana center back went on to say that “it’s better to go to Madrid with a 3-2, we’ll be more alert - we have a lot already won playing like we did today.”      Pedro : “It was a great game, I'm happy that we won but perhaps we deserved another goal. But I’m content with the match.” “The 3-2 is a shame, if we had scored the fourth it would have been a great result. We’ll have to play a good game at the Bernabéu to win the title.” “Clásicos are always better this way, with fair play between the two clubs.” Macherano : “Seeing what we did on the pitch it’s a bit of a shame, but we’re happy with the end result.” “We can’t forget that we won and that we beat a great team, now it’s up to us to go there and win the title.” “Beyond the result, we were the ones the that carried the game and that’s important. We have to maintain our identity and be ourselves.” “This is the beginning of the season, these matches are very physically and mentally demanding but I believe that we did a good job. We won and that’s what we wanted to do.”

“It’s easy to play alongside Gerard and Carles, they are the best defenders in the world. I’m doing my best so that Carles’ absence isn’t felt.” 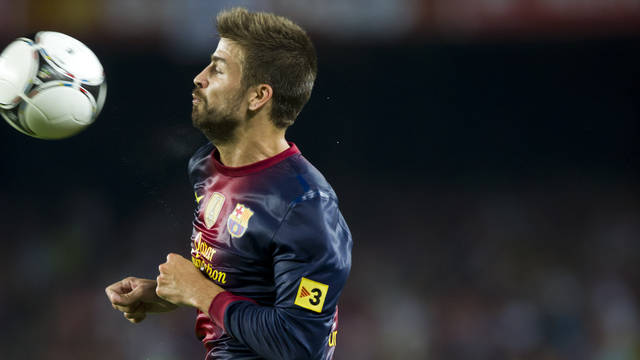